Last Saturday Erin’s Own celebrated the Gathering Festival with a full days activities in Ballycomey. The day began with the playing of The Annual Gerry Holden Memorial under 12 hurling blitz. Teams from Dublin, Offaly, Kilkenny city/ county and Erin’s Own took to the playing field for a feast of hurling. With over 100 young hurlers participating throughout the day the large crowd were treated to some fantastic games played in a great spirit. 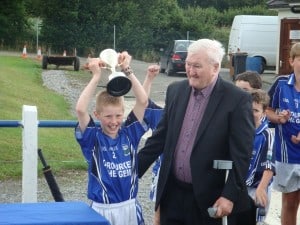 The locals entertained Edenderry in what was their first visit to Castlecomer and after a shaky start they boys in blue ran out comfortable winners on a scoreline of 3-9 to 1-4. To the fore in this game were Kealan Ring, Dan Coogan, John and James Kenny, Ciaran Meagher, Cathal O Reilly and Nicky Connolly. Next up for the Comer boys were city team Dicksboro. The Comer boys started really strong and converted some great points from play and frees to lead at half time by 7 points. They kept the pressure on in the second half and finished the game with 9 points to spare. This was due in no small part to the hurling of Kevin Holland who would go on to play a great tournament throughout, Connor Clarke, Killian Hogan, Luca Downey, Kevin Smith, Ashley Kerr, Lee Holden, Shane Coogan, Dara O Rourke when out around midfield and Billy O Neill. This win set the local boys up to play the winners of group 2 in the Cup Final. After a titanic struggle Kilmacud CroKes from Dublin emerged as group winners. The final was played in front of a large crowd encouraging on the two teams from the off. With the Comer boys giving away a big difference in size to their Dublin opponents it looked like the could be overrun early on as they went down by an early goal and a point. However the young boys from Comer dug in and chased down every ball and were rewarded when Jack Buggy shot two goals to the net from dead ball’s and added two points from frees. This was end to end hurling from both teams with the skill levels on show quite remarkable for players so young. As the game went into the second half the locals could sense victory and on a number of occasions the shaved the post after some lovely direct hurling. At this stage Connor Clarke, Kevin Holland, Dan Coogan, Jack Buggy, Lee Holden, Kealan Ring and Billy O Neill were doing all they could to drive Comer over the line. When the referee blew the final whistle it was all square and both teams finished on 3-5 each and we headed for extra time. In the first half of extra time Erin s Own added 1-1 to their total and consolidated this in the second half with two more further points. On the final whistle the comer boys had just about done enough to win their own tournament. This was a great panel victory and all the boys showed the skills that they practice every week at training. It was also a great days hurling played in a great spirit. Afterwards all players were treated to a barbecue and goodies compliments of Erins Own Bord Na Nog. All players also received medals and Lee Holden collected the Gerry Holden trophy from his Grandfather Michael Holden.

When all the excitement of the hurling blitz and the downpours of rain had receded it was the highlight of the days activities when two mixed teams of men and ladies took to the field to exhibit their silken skills with the big ball. With the ladies having been in training for this match for a number of weeks leading into the game it was evident from early on that the benefit of the training would tell on the scoreline. Players took to the field who hadn’t togged off for many years. All the pictures from the day can be seen on Willie Hetherington’s facebook page. So after great entertainment the white team came out on top.

Well done to all who helped to make the day a great success. 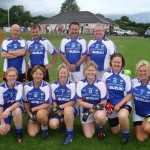 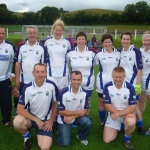 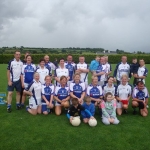