Kilkenny kick off their league campaign on this Sunday January 26th and our club are very proud to see 3 of our players on the starting 15. Best of luck to Conor Fogarty, Conor Delaney and Ciaran Wallace . Make sure to try and get out there and support the lads. #kilkennyabú

Presentation of medals tonight for 2019 U13 Team that won Hurling & Football Leagues and Championships. Thanks to county stars Conor Fogarty & Conor Delaney for presenting the medals and chatting to the boys. Special thanks to John Comerford and Brenda Murtagh for putting together the fabulous framed photo and medals.

Lots of coverage of Erin’s Own activities in this year’s Kilkenny GAA Yearbook. Available in local shops €12.50

Fantastic night @ Erin’s Own American Tea Party in Castlecomer Golf Club last night. Well done to all involved in making it a success. Special thanks to all who hosted tables. Lots of fabulous food and great entertainment! 😃 🥳👏

Our U13s headed to Kilkenny Activity Centre last weekend for a morning of fun activities. Thanks to the coaches for organising the trip. A great way to end their season! 😃

Erin’s Own will be selling raffle tickets Friday and Saturday in Eurospar Castlecomer. Super prizes! All support welcome 👍🏻

Great morning in Ballycomey for our Festival of hurling. A huge crowd gathered as pipers Eugene and Marie Murphy led the teams to the pitch. Then President Michael D (aka Gordie!) with his aide-de-camp Shane met the teams and officials. It was off then to parade around the pitch before the hurling started. 4 teams made up of our players from age 7-11 played fantastic hurling throughout. Both semifinals were very tight with Skehana Shamrocks and Dysart Darkhorses coming out on top. The Denis Brennan League Final was between Spike Rangers and Smithstown Slashers with the Spike boys coming out on top by the narrowest of margins. The Jerry Holden All-Ireland Final was next up with Skehana Shamrocks and Dysart Darkhorses. Again, a tight, tough match from start to finish the with the Darkhorses claiming victory. Paddy Brennan on behalf of the Brennan Family presented the cup to Spike Rangers Captains. Jerry Callinan on behalf of the Holden Family presented the cup to Dysart Darkhorses Captains. Thanks to the officials, the President and his helper, Pipers Eugene and Marie Murphy, our 4 team mascots and our coaches! A hugely enjoyable day with fantastic skills, saves, points, goals, blocking, hooking. Well done to all the boys 👏 The future stars of Erin’s Own!🔵⚪️🔵⚪️

Thanks to Forde’s Eurospar for Sponsorship for our U13 team! Cheque was presented today to the U13 Captains by Willie Forde and new store manager Niall Kinehan 👍🏻

U13 Roinn B League Champions 🏆 A great end to the season for our fantastic U13s today as they won the Roinn B League Final against a tough Tullogher side. Captain Conor Brophy collected the shield. A very successful year for this team, wining Football League & Championship and now Hurling League & Championship. Well done to all the boys and thanks to their coaches. 👏 🏆🏆🏆🏆 Result Erin’s Own 3-13 Tullogher 0-3

Big hurling day in Ballycomey Sunday 3rd November! Over 40 boys from aged 8 to 11 will play for The All Ireland Jerry Holden Cup and The Denis Brennan National League Cup. The following teams will be battling it out! Skehana Shamrocks Spike Rangers Smithstown Slashers Dysart Darkhorses Looking forward to seeing a big crowd of supporters on the day to cheer on our future stars 🌟 Pre-match parade @ 12.30pm 😃

Erins Own @ErinsOwnGaa
16 hours ago
Kilkenny kick off their league campaign on this Sunday January 26th and our club are very proud to see 3 of our players on the starting 15. Best of luck to Conor Fogarty, Conor Delaney and Ciaran Wallace . Make sure to try and get out there and support the lads.
#kilkennyabú
View on Twitter
3
22 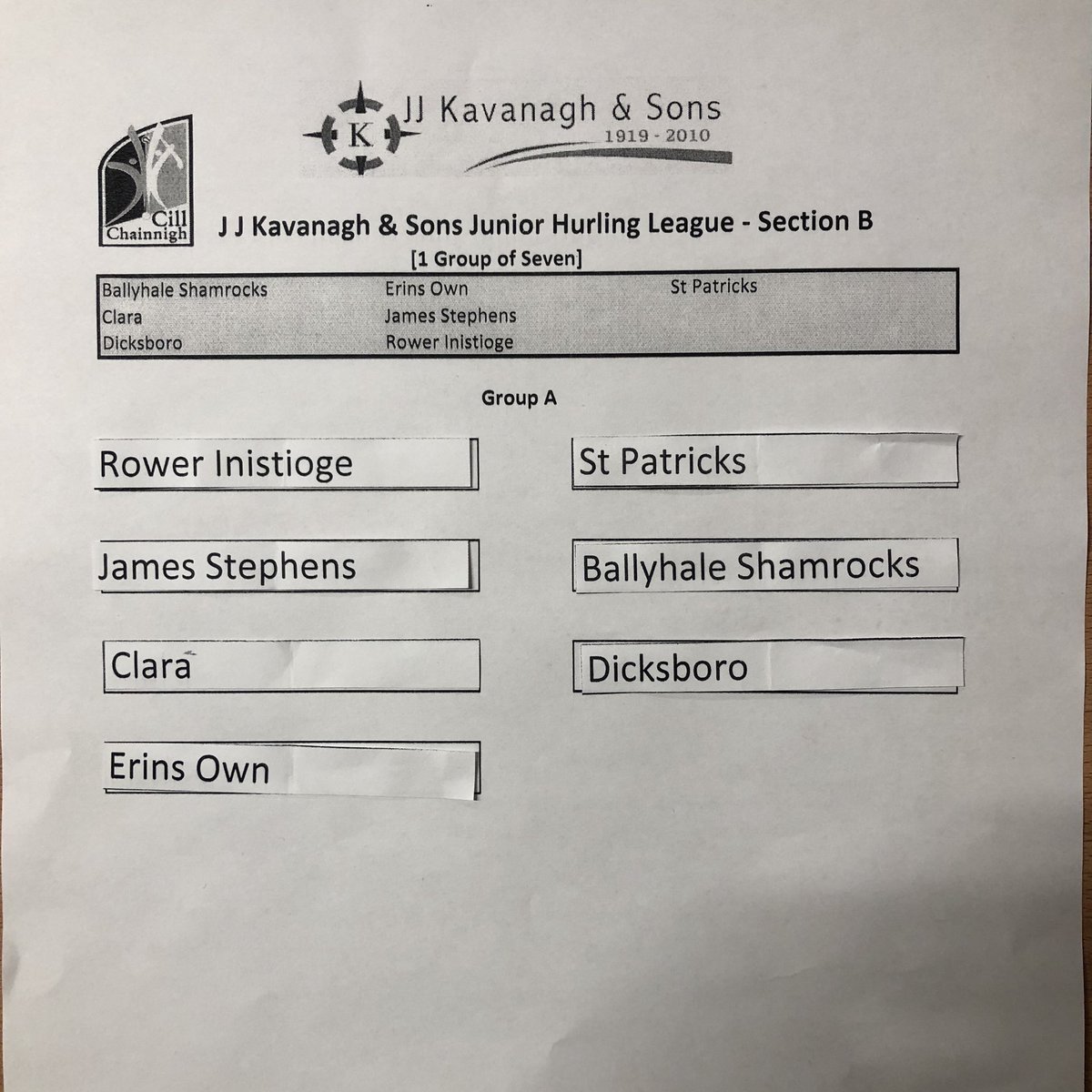