On Sunday last week Erins Own GAA Club brought three bus loads of enthusiastic young and not so young supporters to the Leinster Finals in  Croke Park. A great day was had by all from start to finish with many of our youngest members having their first visit to the famous stadium. The Minor match set the youngster’s excitement rolling for the big match with a great win with our own Conor Delaney playing brilliantly at full back and Niall MaMahon on the panel. The senior match was the highlight for most of the travelling group of nearly 150 and with Senior Club Star Conor Fogarty having a storming game at midfield all were happy when the cup was presented to the Black and Amber players. Afterwards the large entourage were guests of Joe and Julie Comerford and their staff at the Academy Hotel where everyone was treated to a fantastic spread of food and drinks. It was then aboard Denis Buggy’s busses and back to Castlecomer. Special thanks to Denis also who always looks after the club on these annual trips. The picture attached is the happy group outside The Academy Hotel. 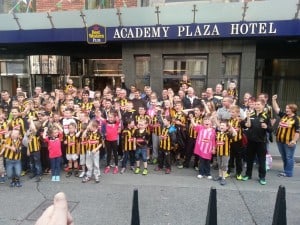