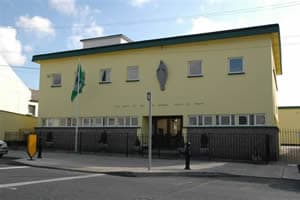 On 29th June 1829 , the Presentation Sisters first came to the Parish of Castlecomer. It was the year of Catholic Emancipation. Catholics were now free to practice their religion and their children could attend schools.

At first the nuns occupied a four-bedroomed thatched cottage, situated opposite the present convent. The nuns taught their first pupils in the sacristy attached to the parish chapel, which was situated in the churchyard and afterwards became The Boys’ School. For over 50 years the nuns had much to suffer from lack of accommodation. In 1879, Mr. Charles Wandesford gave an old hospital in Kilkenny Street to the nuns and part of the present building was erected on the site of that hospital. In 1885 St. Mary’s school was built and the remaining school buildings in 1898.

In 1937, a Secondary Top under the Primary School Board was begun. With the introduction of the free Education Scheme in 1967 student numbers increased and co-education began. The Secondary Top ceased in 1968 and became a Secondary School.

In 1959, an application was made to the Department of Education for a new Primary School. After a year or two, permission was granted. The site was vegetable garden, purchased by the nuns in 1936. The old Primary School was used as a Secondary School until Minister Mary O’Rourke officially opened the new Community School on 23rd October 1990 .

In 1996 the B.O.M. submitted a request to the trustees to extend the play area for the school. This request was sanctioned. A grant was obtained from the Department of Education and in 2000 a new Playground was opened.

The school building of 1898 was purchased by Kilkenny County Council in 1996 and has been converted into a beautiful Public Library for Castlecomer. In 1997 St. Mary’s (our first Primary School) was sold to George Mealy and is now used to store furniture.